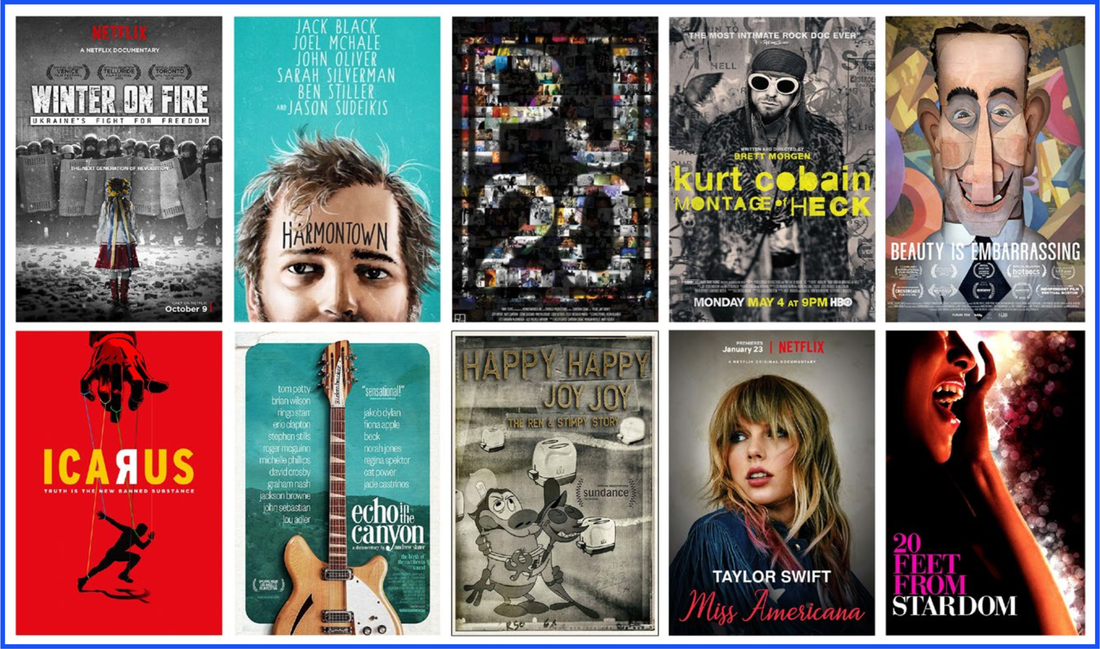 Read Kevin's interview in Filmmaker Magazine about editing / producing RITA MORENO: JUST A GIRL WHO DECIDED TO GO FOR IT -- "This Film Needed to Embody a Feminist Perspective"

Kevin was interviewed about his music documentaries on the podcast "Rock Docs: Behind the Scenes with Sarah and Kenny"

Streamingmoviesright.com features write-up about Kevin on their page for BEAUTY IS EMBARRASSING

FANTASTIC FUNGI  streaming online now! Check it out for some inspiration during this difficult time

FANTASTIC FUNGI  in theaters now!  Click here to find a theater near you

Check out the trailer for FANTASTIC FUNGI

ECHO IN THE CANYON  is a hit at the BOX OFFICE

The Hollywood Reporter enjoyed ECHO IN THE CANYON - check out the review!

​ICARUS  is nominated for the 2018 BAFTA Awards for "Best Documentary" !

​Check out the video art piece Kevin directed and edited for Getty Images!
​
ICARUS  is released on Netflix!

Check out the short film Kevin wrote and edited about Inuit teens battling the plague of suicide through dance
​
ICARUS  sells to Netflix for an unprecedented $5 million!

Trailer for CHICKEN PEOPLE  on Apple Trailers ~ Watch it here

CHICKEN PEOPLE  world premieres at 2016 SXSW Film Festival!
​
COBAIN: MONTAGE OF HECK  Nominated for a 2016 Eddie Award for Best Editing in a Documentary!

The Hollywood Reporter calls ROMEO IS BLEEDING  "surprisingly moving" and "a standout on the fest circuit."

Harmontown hits the internet for international consumption!  Check it out HERE!

Harmontown purchased by The Orchard. Theatrical release set for the Fall

20 FEET FROM STARDOM  is the 43rd highest grossing documentary of all time!

20 FEET FROM STARDOM  breaks $1 million at the box office in its 4th weekend!
"Continuing to play to many sold out shows across the country in its expansion, the film is on pace to become the
highest grossing documentary of 2013"
-RADiUS-TWC

20 FEET FROM STARDOM  wins the Audience Award at the Provincetown International Film Festival!

The New York Times review of 20 FEET FROM STARDOM
"This generous, fascinating documentary about the careers of backup singers, most of them African-American women, seeks to rewrite the history of pop music by focusing attention on voices at once marginal and vital... the picture it paints is gratifyingly complicated."

The Los Angeles Times review of 20 FEET FROM STARDOM
"Their voices are powerful enough to tear you apart and put you back together again, and their stories will do the same."

Editing in 20 Feet From Stardom  gets shout-out from Honeycutt's Hollywood -
"The editing is a marvel that keeps stories and music flowing while creating startling juxtapositions."

20 Feet From Stardom  hits theaters in NYC and LA on June 14th!
Like our facebook page and stay up to date!

Crossfire Hurricane wins award at the 10th annual FOCAL International Awards for
"Best use of footage in a production featuring music" !

Variety reviews Beauty is Embarrassing -
"In a genre with little room for commercial, crowd-pleasing breakouts, this doc could be a big earner."